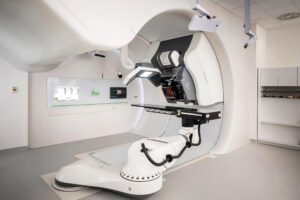 The New Mexico Cancer Center is planning to build a $43 million proton beam therapy facility at its Albuquerque headquarters, bringing to the state for the first time a technology that fights certain cancers in a more targeted fashion than traditional radiation.

“This will definitely be an advance for this cancer center,” said New Mexico Cancer Center CEO Barbara McAneny during an interview with the Journal. “… It really puts us at the forefront of being innovative.”

McAneny said the planned proton therapy facility, which will be the equivalent of three stories tall and involve two components that each weigh more than a Boeing 737 aircraft, will take around three years to design and build. Still, she said the benefits to patients are numerous, giving the center another way to fight a range of cancers that are difficult to treat through other methods.

“We want to be able to have the tools here for New Mexicans, that they can get every modality of treatment that they absolutely need, and have it in one building,” McAneny said.

City and state leaders were on hand to celebrate the expansion during a news conference Tuesday. During the event, Gov. Michelle Lujan Grisham, who lost her sister to brain cancer, praised the center for bringing “the most advanced, significant therapy available” to New Mexico.

Albuquerque Mayor Tim Keller said the technology has the potential to make Albuquerque the center for this kind of care for other areas of the Mountain West, bringing patients to the city rather than requiring them to travel to other parts of the country.

“We’re proud to be the health hub for a thousand-square-mile radius around us,” he said.

Keller said the facility is expected to create 250 construction jobs, and $1.5 million in additional economic impact.

“When we do think about the cornerstones of what makes Albuquerque special … one is absolutely health care,” he said. 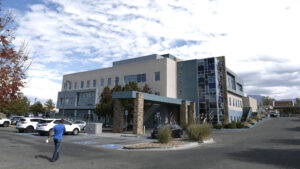 The New Mexico Cancer Center announces the multi-million-dollar development of a new lab to deliver a cutting-edge therapy to its cancer patients. (Adolphe Pierre-Louis/Albuquerque Journal)

Gary Barlow, radiation oncology director for the cancer center, said Friday that proton therapy has gained popularity over the last 15 years as a technique to fight cancers that are challenging to treat with traditional radiation routines. Unlike conventional radiation, which uses X-rays that travel in and out of the body and can damage normal tissue cells along with cancerous ones, proton therapy attacks the cancer specifically.

Barlow, who developed similar centers in Texas and Florida before coming to New Mexico, said the technology accelerates protons – subatomic particles present in the nucleus of an atom – using a device known as a cyclotron. The protons are then administered to the patient. Unlike radiation, the therapy can be administered very precisely, Barlow said, attacking just the tumor and stopping without passing through the patient. This, Barlow said, means less damage to surrounding cells, and fewer harmful side effects.

“When you don’t damage normal, healthy tissue, you don’t get chronic, long-term side effects,” he said.

A 2019 study from medical journal JAMA Oncology notes that the treatment was associated with “significantly reduced acute adverse events that caused unplanned hospitalizations” when compared with conventional radiation.

Because the therapy is more precise, Barlow said it’s useful for combating tumors that are near organs, including central nervous system cancers, prostate cancer, lung cancer and breast cancers located near the heart.

“We don’t get to choose where a cancer happens in our bodies,” Barlow said.

McAneny said just 38 locations across the country currently offer proton therapy, due in large part to its higher cost. McAneny did not offer a specific cost range, but acknowledged that it would likely cost slightly more than radiation treatment at a New Mexico hospital.

“What we have here is a bunch of doctors who are going to the bank and taking out a loan and signing our personal guarantees on that loan to build this,” McAneny said. “So we’re committed to bringing this.”