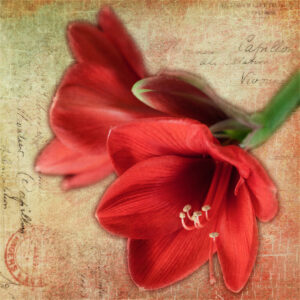 Once she completed her residency, Susan developed a passion for roses. She became an ARS Consulting Rosarian, Horticulture Judge, and Arrangement Judge. In 2004 she bought her first digital camera so she could photograph some of the roses she was judging. One thing led to another. Susan completed the Digital Photography program at UNM CE. She was instrumental in the development of ARS guidelines for judging photographs at ARS rose shows.

Floral photography remains a passion. Susan exhibits regularly in Albuquerque. Her images have been published in American Rose and Shadow and Light, among others. She has exhibited in Buenos Aires (2012), Berlin (2016), and Barcelona (2021). Her Lily was awarded 1st Place - Outstanding Achievement in the 8th Annual Black and White Spider Awards.

The daughter of a biologist, I grew up with flowers. Flowers were a major stimulus behind my plunge into photography. I often create “portraits” of flowers. Just as no two people are alike, so no two flowers are exactly alike. Sometimes I will emphasize structure; at other times color; and at others, vibrancy. Photographs are one way to share the beauty that I see in the world. The Botanical portion of this collection is typical of my approach to flowers.

2021 was unsettling in many ways for many people. During a particularly stressful time I experimented with digitally deconstructing and reimagining flowers. The results surprised me: “Old Woman and Mask” seemed almost a self-portrait. Virtually all of these “Floral Fantasies” remind viewers of something, although different viewers see different things. Friends refer to them as “Susan’s Rorschach Tests.” The images ask “what do you see?” and invite you to use your imaginations.