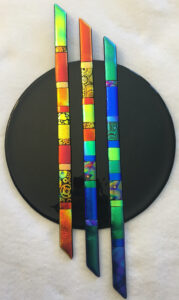 After years working as a PhD Mathematician/Scientist, I found it time to retire.  I had managed lots of people but had not done any “hands on” science for a number of years. Playing a lot of golf and exercising I found was not using my mind creatively. I had an interest in doing artwork using my hands and started looking for a beginning course in creating pottery. However; at the time I could not find such a course but did find one in fused glass art. That got me started on doing standard fused glass, but I wanted to do something different using some of the ancient mathematical ratios.  Thus began my journey combining math and art.

I was born on a remote sharecropper farm/ranch in Kansas. My education began in a one room country school and progressed to getting a PhD in Mathematical Statistics, on a NIH fellowship, at Kansas State University. It was also an honor to be voted into the “Science Hall of Fame” at Southwestern College. After graduate school, we spent 23 years at the Los Alamos National Laboratory (LANL) studying risk-cost-benefit analysis of energy and mineral development in the Western USA. As the LANL Assistant Director, I was honored to lead a US Government effort to support energy, mineral and economic development in Central America and the Caribbean countries. After leaving LANL, I became President and CEO of a laser based Biotech Company. The various laser crystal coatings use in the company and the dichroic coatings have many similarities. Fused dichroic glass is my first venture into the field of art.

My wife, Jan and I, are a team in producing Lohrding Design art and we have been married for 58 years. We have 2 children, Brad and Tami, and two grandchildren, Ben and Grace. I do most of the design and production of the art and Jan does the finish work on each piece.

My goal as a fused glass artist is to use the very modern material of dichroic glass displayed with ancient, eye pleasing ratios to create very unique art. I am stimulated by the dichroic brilliance of the glass and combine that with aesthetically appearing ratios. The ratios include the ancient golden or Devine ratio and the mathematically related Fibonacci sequence for proportions in my design. These ratios were used a great deal in the art of Leonardo Da Vinci and Michelangelo. Also, the eye pleasing use of rectangles by architect Frank Lloyd Wright is inspiring to me. I use shapes, sizes, colors, ratios and reflectance to try to produce visional poetry in the creation of unique Wall Art, Wall Crosses, Totems, Trays and Waves. I have been honored for my artwork with awards both locally and internationally.