Peter Fitzpatrick was encouraged at an early age, by his dad, to draw and paint. He was also encouraged by his high school art teacher to pursue his interest in art. In 1969, Peter began his undergraduate work at the Art School at State University of NY at Farmingdale. During that time, he frequented the galleries and art museums of New York City. Viewing so much great art was an education in itself. After two years, he transferred to the University of New Mexico in Albuquerque, where he completed a Bachelor of Fine Arts degree, graduating cum laude in 1973, and his masters degree in 1980.

Peter began a career in art education in 1973 and worked in both public and private schools until 2012. During those years 39 he helped young people to develop their own artistic style and visions while continuing with his own art in off hours. He works in both clay and paint. He exhibited locally for the most part although his work has appeared in collections from New York to Washington State. In the past 5 years he has worked with other artists to form the 9X9 Artist Group. Together they have curated and produced their own exhibitions, primarily in conjunction with the African American Performing Arts Center.

Peter primarily uses oil and acrylic paint on canvas and board. The purpose of Peter’s work is to draw from whatever feeling, mood, or idea he is holding and create an object that includes components that are integral in an outcome that is whole. All painters are mark makers; therefore, he is not unique in that regard. What sets him apart is the developmental process of the marks he makes, and their accumulation in the painting. In the composing of the elements and principles that comprise a piece, the application of paint is often intuitive in its craft and unrestricted by device. Tools that may seem unlikely find their way into paint application and clay forming. 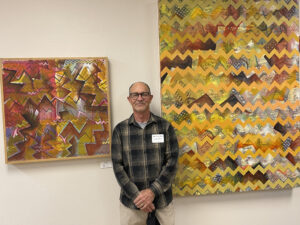 Peter’s artistic ideas can derive from a walk on the valley ditch banks, a stroll in the mountains, or a visit to a Pompeii excavation site. The archetype plays a repeating role as does nature and the resonant teachings of truth that have held up across the expanse of time. In conveying his work, Peter believes that it is more important to share what is in the heart than the (ego) mind. Although he acknowledges the role of the mind in the creative process, he recognizes the importance of the heart in tempering its influence. It is always a compromise.