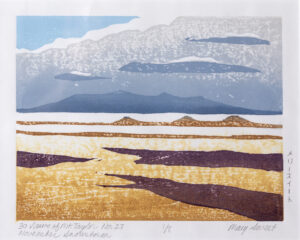 I have been a painter all my life, in watercolor and acrylics, and a woodblock printer since 1993. Landscape is my main interest. I received both Bachelors and Masters Degrees in Art from Stanford University and I have lived in Tijeras, NM since 1970.

I have been in many one person, juried and museum shows, and my work has been widely published. I am also a Local Treasure recipient.

The landscape has always been my primary inspiration. As a child I spent summers on my grandparents’ farm and treasured those days. I went hiking and camping as a Girl Scout. I always loved mountains, first Ohio’s gentle hills and then the grandeur of the Rockies and the West. When still a teen-ager I discovered the pull of the canyons and deserts and learned to love the wild places where there is time to see, hear and think.

My series “30 Views of Mount Taylor” is a homage to the great Japanese woodblock printer Hokusai’s “36 Views of Mount Fuji.” Both mountains are considered sacred in their part of the world. I started it in 1999 and ended up with 42 views instead of 30, just short of Hokusai’s 46. These images depict Mount Taylor from many angles and during different seasons and weather conditions.

Initially I was inspired by my drives from Albuquerque to Tijeras where I live. I saw Mount Taylor in the distance, sometimes small and far away and occasionally clear and translucent blue where the mountain looked quite near. As I got more and more invested in this series, I looked at Mount Taylor from many other angles including from the air. Mount Taylor is sacred to many Native American people. I learned to “see” this beautiful mountain rather than taking it for granted and I hope that this series inspired others to do the same.