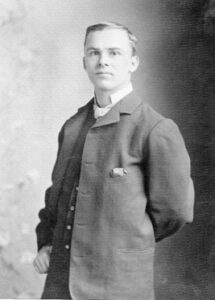 Joseph E. Smith (1858–1935) was born in Abington, Massachusetts. He studied engineering at the Massachusetts Institute of Technology, but was forced to leave school when his father’s business failed. His passion for photography took him west to the Chicago area, where he later met his true love.

A boyhood friend of Smith, Edwin A. Bass, had moved to Socorro, New Mexico, and he urged Smith to come help with his business, and experience the “Wild West”. Shortly after he arrived in Socorro, Smith joined Bass, George Hoyt, Clate Cowles and others in establishing ranches located about 60 miles southwest of Socorro. Their attempt at ranching was not successful, and Smith lost about $4,000 in wages and investment funds.

Joseph Smith’s mining attempts were profitable enough that in 1884, he was able to purchase the photographic equipment and studio from his friend, Edwin Bass, who was engaged to be married and was leaving the West. In 1886, Smith himself married after more than three years of courting Elizabeth Ann (Myscie) Driver through the mail. They were married in Socorro and “honeymooned” in Kelly.

From 1886 to 1888, Smith was a cashier at the Atchison, Topeka & Santa Fe Railroad depot in Socorro. From 1888 to 1903, he was the manager of the J.C. Baldridge Lumber and Hardware Company, and from 1903 to 1909, he operated his own drugstore and insurance business on Manzanares Street. The drugstore was destroyed in a fire in 1908, and was not insured. 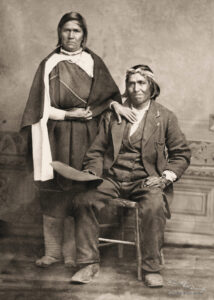 From 1909 until his death in 1935, Joseph Smith was active in real estate and insurance. He was also on the City Council, and served on the Board of Regents for New Mexico School of Mines. Both he and Myscie were active in the Episopalian Church of the Epihany, and founders of the Socorro Presbyterian Church.

Smith operated his commercial photographic studio until 1895, and continued taking photographs throughout Socorro and the surrounding area. His life’s work consists of more than 3,000 glass-plate and film negatives. The home where he lived and worked is being preserved as the J.E. Smith Museum and Gallery. It is located on Central Avenue in Socorro. (Tours by appointment.)

I have been involved in photography since High School, as well as being a visual artist in various other media. I started working with computer design around 1988, including digitizing and manipulating photographic media for silk screen application. The digital photo restoration started by chance when the tourism director for the City of Socorro asked me if I could digitize and repair a damaged photo of Elfego Baca. That led to a number of other jobs in which I improved my skills. Among the projects, I was asked by geophysicist, Dr. Alan Sanford, to digitize and restore over 200 glass plate negatives taken by his father, the noted pioneer astronomer, Roscoe Sanford. Several years ago, my wife's cousin, Suzanne Smith, asked if I could digitize and restore their great grandfather J. E. Smith's photos. To this date I have restored about 150 of his photos. They encompass most of the areas of life in the territorial New Mexico town of Socorro, and the surrounding area, from masqued balls to cattle roundups, from miners in the mines to the opening of New Mexico School of Technology, and a lot of things in between. The 20 pieces in this show are just a good sample.