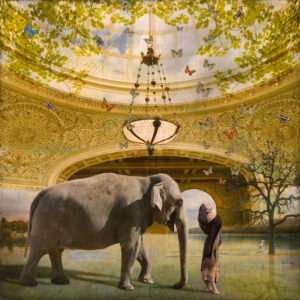 Sondra is best known for her botanic still life work. She was published in Graphis Flora as well as Graphis Photo Annual 2005 and her works can be found in private as well as corporate collections. Wampler continues to explore new themes in her work and is currently involved in photo montage mixed media.

In Paradise is a series of dream like imagery I began in 2014. The word paradise originates from the Greek word Para’deisos which conveys the meaning of a beautiful park-like garden. Each pieces in the series places a figure from art history “in paradise” where all living creatures are at pieces and harmony with one another.

With these artworks I convey to the viewer my love of art history and the figure by combining them with my own photographic imagery. This is accomplished by appropriating from such great painters as John Singer Sargen as seen in the piece “Mrs Henry White in Paradise.” I am paying homage to the artist by resampling their work into my own imagery, changing the context of the piece. I find it starts an interesting dialog with the viewer, sometimes not knowing why a pieces seems familiar.

Appropriation has played a significant role in the history of visual, literary and musical arts. In the visual arts to appropriate means to properly adopt, borrow, recycle or sample aspects of man-made visual culture. I have resample just the figure from the original painting. The new work re-contextualizes what is has borrowed to create the new work. Artists from Picasso to Jeff Koons have used appropriation in some of their works with Andy Warhol being the artist who almost exclusively used or borrowed imagery from popular culture.