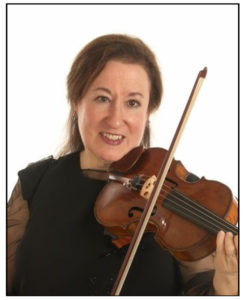 Priscilla Hallberg is a concert violinist, lecturer, educator, radio personality, and a 27-year veteran of the Boston Pops- Esplanade Orchestra. She has been on more than twenty national and international tours, working with Arthur Fiedler, John Williams and Keith Lockhart. She has toured as a soloist on the Mid America Arts Alliance roster as well as those of Kansas, Iowa and Texas. She has received grants from the Iowa Arts Council, the City of Garden City, the Western Kansas Community Foundation, and the Finnup Foundation for educational programs. Host of the “Amarillo Symphony Presents,” radio show on npr, she offers multi-media lectures and recitals for both adults and children.

Priscilla has played the baroque violin professionally for over 30 years. A former member of the Boston Baroque, she has performed and recorded with the Boston Camerata, and Amor Artis, the Sine Nomine Singers, the Eighteenth Century Ensemble the American Boy Choir in New York. She studied baroque violin with Sigiswald Kuijken, Nancy Wilson and Richard Gwilt, and has taught baroque strings through the University of Texas at Austin.

The recipient of a doctorate in violin performance from Rutgers University, she also holds degrees from Boston University and the University of Iowa, and has attended Juilliard and Indiana University as well.

She has taught violin at the University of Northern Iowa, Holy Cross College, Murray State University and Washington State University, and has been the Director of Orchestras at Central College in Pella, Iowa; at Garden City Community College, in Kansas; and at the Medicine Hat College Conservatory in Alberta, Canada. In 2006 she founded the String Academy of the Plains in Southwest Kansas, and was its Executive Director and Lead Teacher for the last ten years, creating the “Strings and Friends” Concert Series, showcasing string performances in all styles of string playing. Currently, she continues to teach at home in the North Valley of Albuquerque.

June 18 Reception
Artists on the Rise Exhibit
Scroll To Top