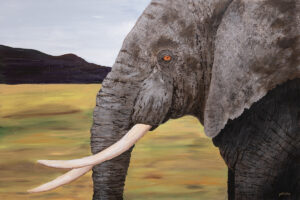 Patricia grew up in Bellport, a small village on the south shore of Long Island NY, and never wanted to be anything other than an artist. Her family, which included several artists, was always inspired and surrounded by art, music, theatre, and adventure travel. She was writing stories and illustrating them at 6 years old so it was natural that she majored in fine art and art history in college. She received a BA in Art History with a minor in studio arts that included painting, printmaking, ceramics, and silversmithing, from SUNY New Paltz in 1977. She also completed a year of post-graduate work in Museum Studies at Syracuse University in NY in 1983.

Since 1994, Patricia has exhibited her artwork at juried shows in museums and galleries around the US and in Taiwan, Mexico, and Ukraine. In 2005, Patricia was chosen to be an Artist-in-Residence for a month in Balatonfured, Hungary and, in 2009 she was invited to exhibit her art at the Florence Biennale. Patricia has also had her artworks published in 5 books and featured in 12 magazine articles. In 2012, she was invited to be a featured artist and teacher in Tainan, Taiwan and also in Beijing, China in 2015. Included among the dozens of awards that Patricia has won for her art, she won a Niche Award in 2008 and again in 2013. The State of New Mexico has purchased and installed 10 of Patricia’s landscapes as part of the Art in Public Places Program at various sites around New Mexico.

“My inspiration comes from travel in Asia, East Africa, Russia, Antarctica, and extensive travel throughout North America and Europe. I’m drawn to a few subjects in nature that I find perpetually intriguing and my voice is whispering a tribute to the incredible beauty in both the subtle and violent forces of nature, only touched by the hand of humans on rare occasions. I’m obsessively drawn to trees, rocks, all forms of water, and animals; I portray these subjects as if they were asking to me to reveal their messages to the world. Although my first passion as an artist was photography, I spent over 20 years creating my visions in mixed media fiber art before deciding to concentrate my creative energy on paintings and photography. My paintings, photographs, and fiber art are dramatic portraits of Earth and I hope to draw the viewers into these scenes to share the exhilaration I feel and to cherish the wonders of the place we call home.”