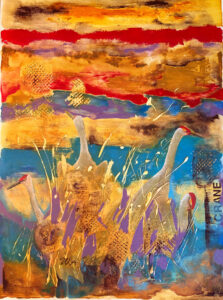 P.K. Williams is a mixed media artist working and residing in Placitas, New Mexico. She originally majored in Art but decided to pursue a career in education, thinking she would have plenty of time to create art with all the “time off” as a teacher. She soon learned that a teacher’s time off is never really “time off” and she ended up using her creativity in the classroom instead of creating art. Then she got married and had a family which also became a priority.

She truly loved being an educator and a mother and devoted all her time and effort to both but there was always something missing in her life. Finally, in 2012, she got the chance to pursue her career as an artist after relocating to Albuquerque.

She has shown her work in three different galleries in Albuquerque, one of which she co-directed. She has participated in various solo and group exhibitions in and around the Albuquerque area and has had work accepted into exhibits in San Diego, New York, Denver, and Texas. Her most recent solo exhibition was at The Open Space Visitor Center in Albuquerque. P.K. has won awards locally, in Colorado and in Texas. At the end of February 2020, she had her work featured on the cover of the local Alibi publication to celebrate Women’s Month. She has also been a featured artist on Artsy Shark.

I enjoy “problem solving” so abstract art was something I was drawn to. I love beginning with a concept, exploring different media, painting intuitively and then stepping back and deciding whether the composition works. There is always a solution and making a piece “work” is a thrill for me and it is also one of the main reasons I paint.

I also enjoy connecting to people. Since my work is not always realistic; but there may be “touches of reality” in the piece, I find it inspiring when people make positive comments about my work and communicate their perceptions of the piece. Sometimes they even make personal connections and translations. This is another reason I love being an artist.

The work in this exhibition was inspired by the bosque here in Albuquerque as well as the wildlife which lives there; mainly the sandhill cranes; our yearly visitors. The bosque is a magnificent source of beauty and is very inspiring but, again, my aim is not to copy but to reference. Cranes are a symbol of hope, good fortune, happiness, and true love. I think the NMCC is a perfect place for them to land.