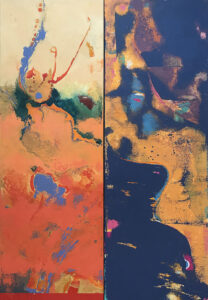 Rebecca Nolda - completed her MA in fine art/art history at the University of Minnesota, taught there for three years both during graduate school and after, and then spent the next several years as a corporate new media specialist/graphic designer. Since leaving that environment in 2012, she has been a full-time artist working in mixed media, focusing on different themes that invite her interest: living in the city; industrial residue; black and white stories; fault lines; mandalas; ciphers; and most recently, a series that explores geological formations, called Mapping the strata. She has been fortunate to exhibit artist’s books, paintings, collages, and drawings nationally and internationally with pieces in the collection of the School of the Art Institute of Chicago Library, the Tweed Museum of Art, and Artists’ Books USA (United States Information Service, India).

P.K. Williams - is a mixed media artist working and residing in Placitas, New Mexico. She is also a Master Gardener and sometimes uses plants and animals as inspiration for her work, though most of her work has evolved into abstract exploration. She began her career in 2012 after relocating to Albuquerque with her husband. She has shown her work in three different galleries in Albuquerque, one of which she co-directed.

She has participated in various solo and group exhibitions in and around the Albuquerque area and has had work accepted into various exhibits in San Diego, New York, Denver and Texas. Her most recent solo exhibition was at The Open Space Visitor Center in Albuquerque. P.K. has won awards locally, in Colorado and in Texas. At the end of February 2020, she had her work featured on the cover of the local Alibi publication to celebrate Women’s Month. She is a member of New Mexico Women in the Arts, the Rio Grande Art Association, the New Mexico Art League and a signature member of the New Mexico Watercolor Society.

We share a propensity towards certain colors and nonobjective imagery and became intrigued with the idea of painting pieces independently and then bringing the work together to find paintings that could be paired — an experiment. We work separately in our own studios, each creating paintings on the same size canvases, 36” high and 12” wide, without conversation or reference. Then we bring the paintings together, looking for those speaking the same language, in other words creating a conversation. We physically JOIN the pieces to make a SINGLE piece of art, either 36” x 24” diptychs or 36” x 36” triptychs.

Due to COVID 19 restrictions, our distancing became a requirement instead of an experiment. Masks and a measuring tape became an essential part of our toolbox! Physical separation for the actual creation of the work did not change; however, the pairing process was vastly different. Though there were apparent limitations due to the pandemic, we found that we were still connected and, our most recent work was even fresher and more exciting. Our interest is in stimulating a conversation with viewers that echoes the conversation between our paintings: independent viewpoints that when married together, create a new, whole idea. There's a surprise in what each "player," whether human or on canvas, brings to the dialogue.