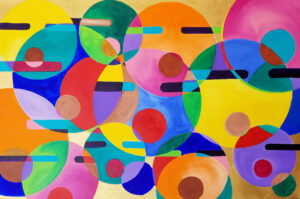 Nathan N. Nez Sr. was born on the Navajo Reservation in Woodsprings, Arizona, and started his journey for his love for art at an early age. After graduating from high school, Nathan joined the army and was stationed in Ft. Hood, Texas before being flown off to fight the War on Terrorism in Iraq from 2003-04. In the military he would draw on envelopes that were sent home to family and friends, so they would have a piece of his art work.

In 2010, Nathan enrolled in the University of New Mexico planning to become an Architect. He soon found out that he had never let go of his love for art and switched his major, earning a Bachelors of Fine Art in art studio. His artwork has been featured in Native Entertainment magazine, Gallup Independent and a few other magazines and newspapers. Nathan has created murals at Albuquerque Health Care for the Homeless, Nativo Lodge, and is currently working on one for Albuquerque Indian Center.

Nathan continues to achieve his own successes with the support from his wife and kids. He is the first male in his family to graduate from college. He continues to be a role model to not only his own children but to all the young Navajo boys and girls on the reservation. He wants to show them that, no matter where you come from, you can be a successful person and that the only limits in life are the ones you set for yourself.