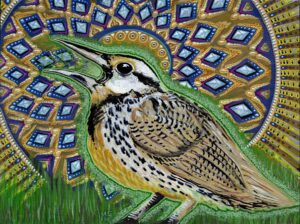 Michael's live art is the evolution of his past life as a scientific illustrator: a field guide to the weird imaginal biology invoked by the ecstatic atmospheres of festivals and concerts. Each work emerges as an exercise in transparent listening and a response to the unique tone of a place and time – capturing the cast shadows of a moment's shifting energies to reveal verdant and exultant imagery erupting from a fractal growth of marker strokes, written in the archetypal tongue of dreams.

Since he started painting live in Fall 2007 as part of the Boulder, Colorado underground, Michael has earned a reputation as possibly the world’s only specialist in paint pen performance, wielding them with a precision, detail, and dynamic flair impossible with brushes.

Devoted to adventure, he has made art for enormous crowds in an outstanding range of situations – from raging basement clubs to the NASA Ames Research Center to the Australian Outback – day and night, onstage and off, through hurricanes and dust storms, and alongside legendary artists such as Alex & Allyson Grey, Robert Venosa & Martina Hoffmann, Android Jones, Amanda Sage, Oliver Vernon, and Mars-1. In addition to countless festival appearances, he has held live art residencies in Boulder, Denver, Phoenix, Kansas City, New Orleans, Austin, and Santa Fe.

Statement by Michael Schwartz, PhD, Professor in the Department of Art at Georgia Regents University

“Michael Garfield’s [work] revels in the esprit of scientific illustration and the energy of musical vibration, affecting a fearless curiosity about what is. He is an ‘illustrator’ – a creative illuminator – of the subtle domains of being, whose modes of existence are sonorously vibrational. In the Renaissance, architecture (like that of the great Palladio) was organized via ratios proper to musical harmonies, such that seeing the building was also ‘hearing’ the harmony of that edifice and its lived spaces. In the early twentieth century, with the Renaissance view of painting and poetry as sister arts having fallen away, new inter-media comparisons emerged – as that between abstract painting and music – exemplified in the work of Kandinsky. Garfield’s art deepens this exploration of the art of painting as visual music, attuning us to the subtle vibrational aspects that accompany gross sound – translated into folds of the visual register. His art is seamlessly synaesthetic. We see, feel – and hear – the presence of mysterious and magical subtle beings who pulse with vitality, challenging standard cultural assumptions about what should count as Life.”