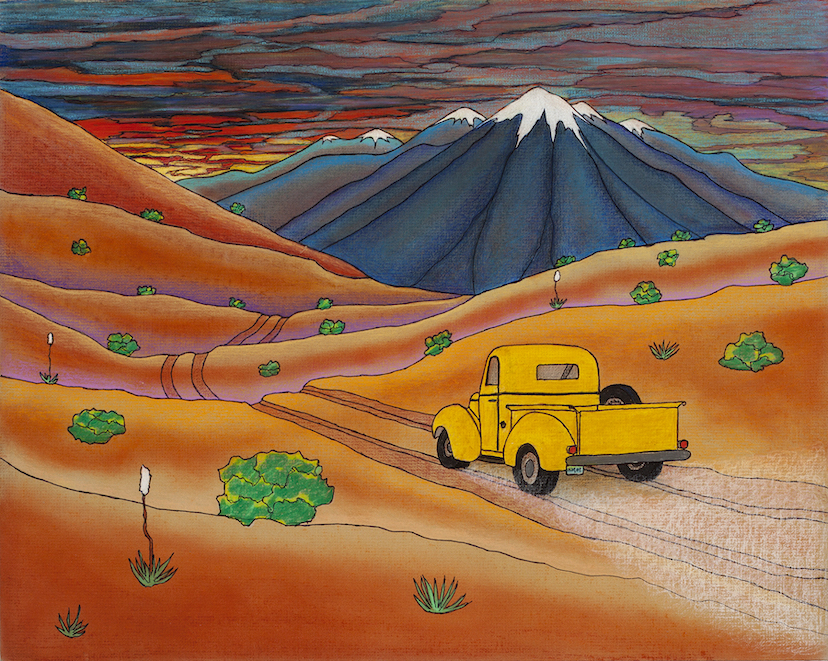 Mel is originally from Little Rock, Arkansas, the oldest of seven very artistic siblings. He started private art lessons at age 10 and had three years of art and mechanical drafting classes in high school. He continued art classes at Henderson State University and The University of Arkansas at Little Rock.

In 1983, he moved to San Antonio, Texas where he took classes in stained glass. Stained glass became such an obsession; he decided to open a stained glass studio. He owned and operated the studio for seven years. In 1989, he was a feathered artist in the 500-page book, “The Guild, A Sourcebook of American Craft Artist.”

In 1989, he relocated to Albuquerque, New Mexico, where he opened a Mechanical contracting business. In addition to his vocation as an artist, he has maintained a lifelong professional career as a Mechanical Contractor.

His favorite art project is a large glass and metal wall sculpture he designed for the boardroom of Albuquerque based Emcore Corporation. It depicts “The Long Walk of the Navajo”. He used Navajo Petroglyph designs from Canyon de Chelly, Arizona to show the unsympathetic 1864-forced removal of the Navajo people by the U.S. military to a prison camp in east New Mexico.

He almost died from an infection in 2017 that forced him to stay confined at home for most of 2018. While in recovery, he began to paint again after a 30 year absence. This renewed a desire to paint once again full time.

Mel’s painting style is “Contemporary American Realism”. His recent series of “traditional” Native American women have drawn praise and many have said it is reminiscent of the late Navajo artist R. C. Gorman, although Gorman’s style was “Abstract” Realism”.

He prefers to paint with mixed media, combining Gouache, pen and ink, colored pencil, graphite, watercolor, and pastels to create the brilliant colors used in his paintings. He is considering expanding his southwestern women series to include “Traditional” Navajo, Spanish, and Anglo pioneer women of New Mexico.

I am very excited about painting my current series of “traditional” Native America women. I hope to expand this series to include Spanish and Anglo pioneer women from New Mexico during the late 19th and early 20th century. Many have said that this series is reminiscent of the late R. C. Gorman. Although similar in subject matter, he worked in “Abstract Realism” whereas I paint in “Contemporary American Realism”.

Some of the artists that have influenced him the most are G. E. Mullen, Doug West, R. C. Gorman, and most recently Santa Fe artist Jennifer Cavan.