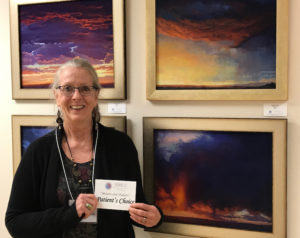 Katherine knew she was an artist at an early age. Her first exposure to European masterpieces took place in Europe in 1970 and again in 1973 when she studied at the Tyler School of Art in Rome. Absorbing works by Rothko, Vermeer, Rembrandt, Appel, Van Gogh, Monet, Turner, Michelangelo and Botticelli was formative. Currently, she is a participant in the Albert Handell Mentorship Program.

Katherine studied art at DePauw University from 1971-1975, with William Meehan. She studied with Stephen Greene at the Tyler School of Art in Rome. She also interned with Willard Midgette in New York City in 1974. Katherine was a frequent visitor to many of the art museums and galleries in New York, Chicago, and throughout Europe. Katherine returned to New York in 1976, and received a master’s degree in art therapy in 1979, from Pratt Institute. During this time, she painted and drew many of the people she encountered in a homeless shelter, on the subways and streets of New York. She befriended members of the Street Painters, including Myron Heise, and attended art critiques in the Bowery. She also took a number of classes at the School of Visual Arts, Pratt Institute, and the Art Students League. She was a frequent visitor to New York galleries and New York’s many magnificent art museums. Katherine’s first one woman show was in New York at the Marie Pellicone Gallery in 1982.

Katherine’s desire to live rurally and paint New Mexico landscapes grew after taking a three month painting trip to New Mexico in 1981. She moved to Taos, New Mexico in 1982 and began to paint skyscapes. She studied oil painting with Marc Bergerson, from 1985-1990. Marc Bergerson, a New York artist, affiliated with Abstract Expressionist painters, taught her the craft of painting. She exhibited with the E.S. Lawrence Gallery from 1985-1986 and the Burke Armstrong Gallery from 1986-1990. She also participated in many of the juried and invitational shows in Taos, including the San Francisco Museum of Modern Art, Art Rental Gallery. Katherine was the curator for the first three Spirit in Art shows held during the Taos Spring Arts Celebration in 1985, 1986 and 1987.

When Katherine’s son, Nathan, was born in 1988, Katherine began a hand painted box business. She sold her hand painted boxes across the United States, Canada and Sweden from 1989-1997. In 1997, she earned a Masters in Counseling and works as a therapist in private practice and a school counselor.

Katherine began working seriously in pastels in 2002. She continued to find inspiration in New Mexico landscapes, the cobalt blue skies and brilliant reds and greens found in plants and geological formations. Sunsets incorporate many abstract patterns as well as beautiful layers of color. She thinks of herself as a “Skywatcher”. Katherine has always thought of herself as a colorist, finding Monet and Turner to be an important inspiration. She has been interested in the portrayal of light through color. She utilizes museum quality textured pastel papers and soft pastels. Sennelier, Schmicke, Terry Ludwig, and Unison are her favorite brands of pastel. She frames using materials that will ensure that her work begins and ends with the highest quality. She is a Signature Member of the Pastel Society of America and the New Mexico Pastel Society and regularly participates in national juried and invitational shows. Katherine joined Albert Handel’s Mentor Program and has appreciated the growth that she has experienced under his tutelage. Her work was on the cover and featured in the August 2015 issue of the Pastel Journal.

However, what Katherine is attempting to communicate is found in the looking not the words. Perhaps you will find a sense of quiet, of peace, and wonder at our natural world in her work.

Skywatcher. A respected friend referred to herself as a fellow Skywatcher. This word fell into place as self-defining. I am a Skywatcher. I have been a Skywatcher as long as I can remember. Big skies float over the desert, approaching weather, defined by the color, size and shapes of clouds. My father used to talk about the meaning of clouds. Clouds have threatened, whirled with power, beautifully choreographed by the growing pressure between hot and cold air. Sunsets have signaled that it was time to bicycle home – my nose and skin full of the scent of rich earth, corn and the warmth of the sun. Skies touch the edges of water, trees, desert, mountains, and islands. They hold all colors at one time or another. I dream about vast spaces, one home dwarfed, the land made rough by air, fire, and water and the pressures and rotation of the earth.

Sometimes others suggest that I might paint subjects more political, more pertinent and meaningful to our present times. But how do you change the very nature of your soul? I left New York knowing that I did not want to paint its pain and anger. I made a conscious decision to contribute beauty to the world. I am in league with the Naturalist and Luminist painters who point to the beauty around us.

What do you find beautiful? What fills your soul with joy and peace? Perhaps the lavender smell of wisteria, a cool breeze playfully stroking your cheek, a cloud as fine as angel hair, colored with shades of mauve, salmon, a strike of blue, the innocence of your children and grandchildren.

Skies are a window to a presence, much larger than we are. At night, stars and planets remind us that there are many mysteries and of our scale in the larger scheme of existence. Skies teach us of our ever changing experience in life, a moment never to be repeated, never the same. No need to hold on to that moment. To try to do so is fruitless. How can you freeze feathering bits of clouds and keep them from gliding across the sky in ever changing forms. What intensely bittersweet moment would be missed if a sunset did not complete its course? It is much better to experience, to be mindful and appreciate what is happening now and then let go.

I wonder. If more people felt it was truly imperative for themselves and their families to know the trill of a finch, the salmon of the Indian Paintbrush endangered in Utah, the clear cerulean blue of an unpolluted sky, would we make a concentrated effort to care for all that is alive. Would violence become less pervasive?