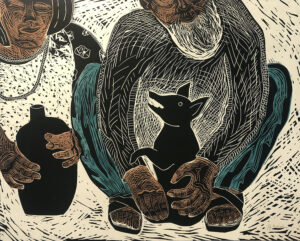 Julianna Kirwin’s original prints are based on the landscape and culture of New Mexico. She uses the rich medium of printmaking to create a visual language of lines and shapes to reference New Mexico’s distinct heritage. The use of a variety of techniques such as hand-cut stencils, woodcut and linocut makes each hand-printed image unique. She states, “I love the carved line, the smell of the ink, the press of the paper against the plate and then the surprise of the texture and color released onto the paper or cloth.” She prints from her Takach press in her studio in Albuquerque New Mexico.

As a resident of New Mexico since 1971, she received her undergraduate degree in Art Education from the University of New Mexico and completed her Masters in Bilingual Education in 2010. However, her training as an artist has largely taken place in Mexico. Exhibitions in the US and Mexico were usually accompanied by her workshops which used printmaking as a way to bridge cultures in a variety of settings such as the International Folk Art Museum in Santa Fe, Casa Cuatro Cultural Center in Guanajuato and rural schools in Oaxaca. Living on the Main Street of Bernalillo New Mexico (part of the famed Camino Real) and raising two children there, Julianna became fascinated with the idea that her home was located on the ancient road that spanned the Americas. Over the course of many years during their childhood, she and her children followed it down into Mexico and lived in Central America for portions of the year. Those rich experiences became the fodder for her artwork which has always included a broad variety of images from New and Old Mexico.

Recent residencies with printmakers in the southern state of Oaxaca Mexico, have widely expanded her repertoire of techniques in relief printing. The subject of Native corn has been a long-term interest and was part of her thesis and curriculum development at the University of New Mexico. She views corn as a personal symbol of the intertwining of man and a wild plant called Teosinte that over time became the Native corn uniquely bred to each location in the Americas. As an art teacher in public schools from 2003- 2015 her students were predominantly from San Felipe and Santo Domingo pueblos, she used corn as a prompt for their artwork that included written stories unique to those students’ experiences of their land. These experiences helped her to form a curriculum that she has used again and again in schools and cultural settings in the US and Mexico.

“I still believe in that 1940’s vision of Diego Rivera’s that art is a unifying element across the Americas, and it’s very important to keep art practices alive-and-well in our communities,” Julianna states in a recent interview. She believes that printmaking is meant to be a communal experience of several folks around the press, some are inking the block, some are turning the handle of the press, some are hanging the prints, and some are busy carving their next block. Julianna has several community printmaking projects currently ongoing in her studio, such as HERSTORY (a group of four women who come together each month to print large images of women they admire) and the Wells Park Neighborhood Mural, a public printmaking event for the inauguration of a new park in her neighborhood.