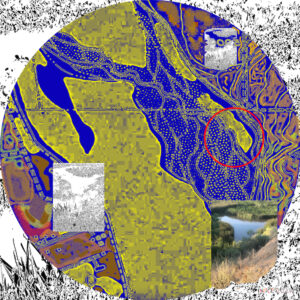 Jonathan Reeve Price, who earned a Doctorate of Fine Arts from Yale, has exhibited conceptual and public art in numerous galleries and museums, including the Albuquerque Museum, the Brooklyn Museum, and the Jewish Museum in New York. Having worked at Apple in technical communication, and consulted with an A-to-Z of major computer companies in the U.S. and Japan, as well as the Los Alamos and Sandia National Labs, he now focuses on digital imagery created and manipulated on a Mac, combining text and imagery to tell stories.

He lives with his wife Lisa and two Corgis, overlooking the Rio Grande as it flows around and through the oxbow.

Rivers fascinate me. Living next to the Rio Grande here in Albuquerque, I get to see the water shine, then disappear in drought, only to swell again in spring, filling the bosque with life, feeding the alfalfa fields via the acequia, marking our landscape with the green stripe down the middle of the dry desert. And, down south, our Rio Grande acts as a liquid border—the imaginary line drawn down the middle of the river as it passes between Texas and Mexico, the last barrier that migrants face as they come north.

Exploring the photos and satellite data of this mighty river may help us imagine those people struggling across the river, and the trackers from the Border Patrol waiting on the American side. I explore the original, useful, scientific images, taking them apart and rebuilding them with half a dozen applications, to imagine the trek of the migrants through this dangerous terrain. My prints are markers on the trail. I live next to the San Antonio Oxbow, just south of Montaño, and walk by every day. Threatened by development, this bend in the river offers refuge to innumerable birds. Out of the main flow of the river, this idling water encourages reeds and rushes, cottonwoods and willows. Years ago, the Army Corps of Engineers led the river away from the bluff, saving the homes built on the overlook, and creating this quiet backwater. Now it is up to us to save the oxbow itself.

There’s one other river in my imagination. It’s the Lena, flowing north out of Siberia into the Arctic, making a lush fan of green in the brief summer there, before freezing over—or, at least it did so before climate change started melting the tundra and extending summer in a landscape that used to be frozen all year.

In this show, then, I am exploring the precarious and the dangerous–the wetlands and the borderlands. I look forward to hearing what you think.