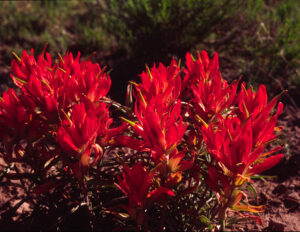 I borrowed a Kodak camera from my father-in-law to take pictures on my honeymoon in 1963 and again for a 3,000-mile cross-country trip at the end of 1963. For Christmas of 1964 I gave myself a Nikkorex F camera with a 50mm Nikon lens and an exposure meter. This was in preparation for a summer I spent in Glacier National Park in the Christian Ministry in the National Parks program. I have about 40 slides from that summer that I still consider worthy of printing and selling or giving away. I initially considered my photography to be just a family slide show hobby. Over time I have accumulated approximately 50,000 slides and later with digital cameras about another 20,000 images.

I gradually ended up specializing in closeup wildflower and scenic pictures. I had a show of my work in Gallup and another in Tucson and sold a few pictures. However, I considered myself an amateur photographer and still do.

As a 40-year career banker I was President of a bank in Gallup for the last 17½ years of my career. One of my special ideas as a bank president was to always give special gifts to my employees at Christmas, and I gave framed pictures one year. The employees loved the pictures so much they asked for pictures another year. I then decided not to sell pictures. Instead, I have given framed pictures to members of my church as sympathy or bereavement cards. In 2006, after open-heart surgery, I gave a 12” x 18” picture from 1965 in Glacier National Park as a “thank you card” to my surgeon. He loved it so much that he asked me how to get to the place where the picture was taken, and he planned to take his family there. During treatment over the last five years for my third cancer, I have given framed 8” x 10” pictures to perhaps 85 or 90 nurses, doctors and assistants as thank you cards at the New Mexico Cancer Center, my dentist’s office and others.

I love sharing my pictures and am now in the process of building a larger portfolio by scanning my best slides.