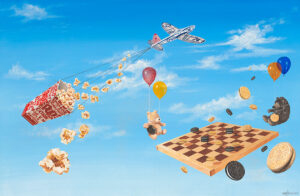 Jeff developed a love for all the Arts in early childhood and that has continued throughout his life. Drawing and painting have been a lifelong passion.

The first phase of his professional career was spent as an actor/singer, director and set designer. He appeared on Broadway in Fiddler on the Roof, later touring with the National Company. He also appeared in the leading role in the long-running off-Broadway production of The Drunkard. His many stage credits include Don Quixote in Man of La Mancha and El Gallo in the Fantasticks. He spent four years with the Hedgerow Repertory Theatre in Philadelphia as the resident leading man and set designer and was a member of the company at Arena Stage in Washington D.C. Among his film credits are his English dubbing of the leading male role in Ingmar Bergman’s epic 5 ½ hour film, Fanny and Alexander.

After 25 years in theatre, Jeff joined the Theatre Arts faculty at a prestigious private school in Los Angeles where he taught Advanced Acting and Technical Theatre. He directed and designed over 75 productions in his quarter-century there as a Drama/Stagecraft teacher. Jeff recalls: “What a gig it was! Imagine 25 years of making Art with kids all day!”

In 2011, Jeff retired to the East Mountains and has taken up painting full-time. He is currently showing at the The Gallery at 400 in Old Town, Gallery ABQ and The Watermelon Gallery in Cedar Crest. He has also shown work at the Chalk Farm and Longworth galleries, in Santa Fe.

In addition to spending many hours at his ease each week, Jeff is currently compiling a collection of his poems for publication. 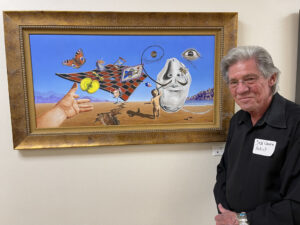 Painting has always been at the top of my list of passions. I spent most of my life in theater, both as an actor and later as a drama teacher. Now, in my Act III, to have the time to concentrate fully on painting is the answer to a life’s dream. My main objective is to continue to develop my craft in my own style, Romantic Realism, and to keep challenging my imagination, quirky as it may seem to some. I think that my theatrical background often guides my choices of what to paint. I strive to create the “larger than life” and to employ humor in my work. I hope to create paintings that range from playful to pensive and at times provocative. I paint for myself, but I rejoice when others respond to what I have to say. Mostly, I hope to project a view of the universe as benevolent--to interpret the world the way I would like to see it. Maybe even to leave it a little better than I found it.