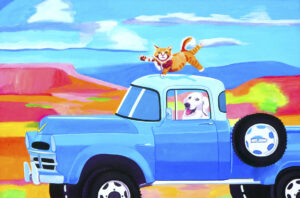 Jeannette Williams was born and raised in California. She received a degree in design from San Jose State University and a master’s degree in art education from the University of New Mexico. She taught at Albuquerque Public Schools for 31 years in all areas of art. She also taught for CNM, The Albuquerque Museum of Art, UNM Continuing Education, and the College of Santa Fe. In 1969 she moved to White Sands Missile Range for a year and then to Albuquerque where she was hired as a high school art teacher. After retiring from teaching, she worked for 8 years as a tour escort for a local agency and specialized in taking groups of clients on international tours and cruises.

Jeannette is both a photographer and painter, although the last few years she has settled into painting. She is working on two series of paintings: portraits of people around the world who she photographed hoping to capture their humanity and their joy for life; and animals in vintage cars and trucks. 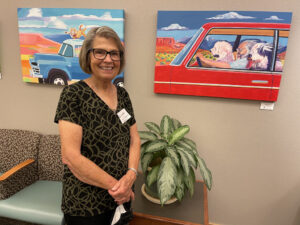 For many years, Jeannette experimented with photo-realism using an airbrush. Her subject matter was vintage cars and trucks. Now she puts animals in the cars and trucks and uses more stylization of color with southwest landscapes. Jeannette also injects the paintings with humor, sometimes allowing the animals to drive, have human names, have friends, and even fly. She began painting animals to entertain herself but has learned how much people love their pets! Jeannette has three pets who are sometimes featured in the paintings: Rivka, an 11-year-old Belgian Sheepdog, Kit Cutty, a 12-year old tuxedo cat, and Amelie, a one year old tortoise shell with “tortitude”. Animals have distinctive and quirky personalities.