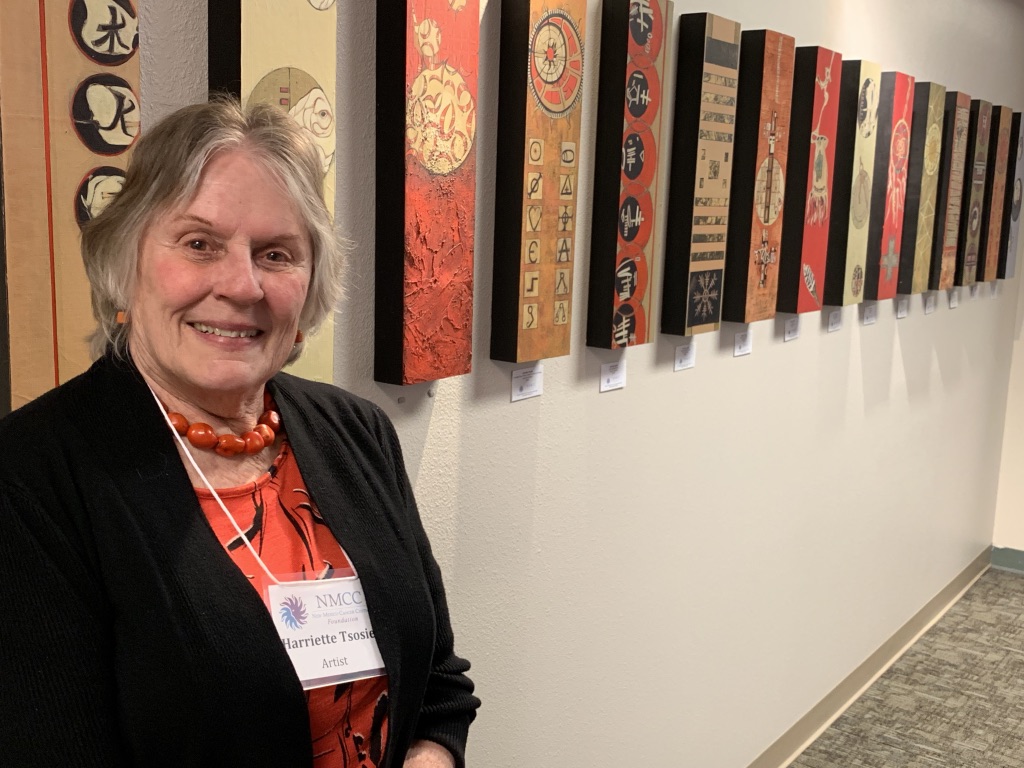 I was born in New York City, raised in upstate New York (Rochester/Buffalo areas), Cincinnati and Charlottesville. We moved frequently as my Father’s electronics engineering career followed his industry’s consolidation after World War II. I graduated from Kalamazoo College, a small liberal arts school in Michigan, where I studied English literature and Art. I spent the summer of my sophomore year in Caen, France, as part of the college’s extensive foreign study abroad program.

I married my college sweetheart, moving to Texas where we both entered graduate school at Baylor University. He completed his PhD in chemistry and became a professor at Drake University (Des Moines, Iowa), while I raised our three children. In Iowa, I resumed my art studies with artist-in- residence Jules Kirschenbaum, a renowned New York painter. After my three children graduated college and my marriage ended, I moved to New Mexico (1995). Here I studied encaustic (pigmented wax) painting with master artists Ellen Koment and Paula Roland. I met and married a Native American man, Carl Tsosie, Jr. (which is why I have a Navajo last name). We lived at his mother’s pueblo for five years before moving to Albuquerque’s South Valley. The geographical upheavals in my life left me searching for my place in the world and my own identity, which became the subject matter of my work. I see identity as shaped primarily by genetics, culture and language. My current work incorporates mark making and text from written languages, whether contemporary or extinct. For me, language holds the key to identity and culture.

Harriette Tsosie is a full-time, award-winning artist, who lives and works in Albuquerque’s South Valley. Her work focuses on the role of language, place and genetics in shaping identity. She has exhibited internationally and her work is included in the Encaustic Art Museum’s permanent collection, Encaustic Art in the Twenty-First Century (2016), as well as numerous catalogs. Her “Becoming Whole” series of 18 mandalas, was created specifically for the Gallery with a Cause. Mandalas (circles) represent wholeness and exist in many cultures. Power is at the center of the circle. She sees some of the steps towards wholeness as: letting go of expectations; accepting uncertainty; facing fear; embracing mystery; and subduing anger, among others. Each of her 18 mandala paintings is titled after one of the steps she identifies as one seeks to become whole in the face of life’s adversities.

I created the “Becoming Whole” series specifically for the New Mexico Cancer Center rather than choosing works from my existing inventory. I wanted the work to speak directly to the Center’s patients, staff, care givers, family and friends. I have lost both a spouse and a daughter-in-law to cancer, so I am acquainted with the grief that ensues following such losses. In fact, my first inclination was to create work depicting those well-known stages of grief. Ultimately I chose to explore the more universal theme of adversity. What choices do humans, by the very fact of their existence, have when confronted with adversity?

My conclusion is that we cannot control the adversity: we can only choose our response to it. For me, that choice was to try to become whole again. That has been a long and difficult journey and I am not there yet, but I can identify some of the obstacles I faced and how I need to respond. That is what I want to share in these small, symbolic works of art.

I chose the circle, or mandala, because that shape represents wholeness. The power of a circle is in its center. The great Native American prophet described it this way: “Everything an Indian does is in a circle, and that is because the power of the world always works in circles, and everything tries to be round. In the old days when we were a strong and happy people, all our power came to us from the sacred hoop of the nation, and so long as the hoop was unbroken the people flourished.

Everything the Power of the World does is done in a circle. The sky is round, and I have heard that the earth is round like a ball, and so are all the stars. The wind, in its greatest power whirls. Birds make their nest in circles, for theirs is the same religion as ours. The sun comes forth and goes down again in a circle. The moon does the same and both are round. Even the seasons form a great circle in their changing, and always come back again to where they were. The life of a man is a circle from childhood to childhood, and so it is in everything where power moves. Our tepees were round like the nests of birds, and these were always set in a circle, the nation's hoop.” It’d be pretty difficult to improve on that way of thinking! I am grateful to my friend Kate Palmo for her insightful title suggestions for the series.