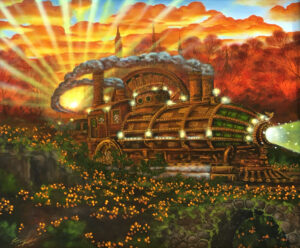 My oil paintings range from disciplined subjects to fanciful fantasy. My influences range from Art Nuevo, Impressionism, Pre-Raphaelite, Sci-Fi, Mythology, Fantasy and my own imagination. I like to pay attention to intricate detail and control of the brush work.

I attended college studying Commercial Arts after which I became a self-taught full-time artist.

I have won many awards for my works and contributions: