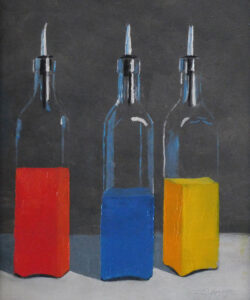 Frederick G. Yost was born and brought up in Connecticut and educated at the Polytechnic Institute of Brooklyn and Iowa State University in Ames, IA. He has resided in New Mexico for the last 40 years. He was employed by Sandia National Laboratories for 28 years and retired in October of 1999. He spends a significant amount of time painting and experimenting with various materials for sources of artistic inspiration. Because his mother was an artist, participation in art related activities began very early. He has taken art courses from several institutions and attended many art workshops throughout his life. For the past 50 years he has exhibited and sold art in galleries, fairs, and competitions and his work has appeared in art magazines and two published books. His work is collected nationally and has won numerous awards.

When focused on my work I am an experimentalist. I have no particularly favorite image themes or media but allow image and medium to evolve interactively. Sometimes the materials at hand suggest the image and at other times it is the reverse. With a particular image in mind, I might search for materials and techniques that will optimize the display of that image. It might be with wood, wax, or canvas and often results in unexpected juxtapositions of form that pleases me. In either case the concept is not immediately complete; it takes several rounds of mistakes and modifications to converge to the final design. For me this process is most efficient and comfortable when I am willing to be alone and quiet. I work on several projects at once to minimize dead time, when progress is slow. My work seldom contains a political statement of any kind but does involve emotion and I benefit therapeutically from the sense of surprise and discovery when a piece is finally complete. The work of an artist, especially, must be creative not repetitive. Creativity, the most intangible of human qualities, is suppressed by our living within artificial constraints and with a developed fear of disappointment and failure. My approach to creativity block is to begin, just begin! I do not fear failure for I know that it is only temporary. A well-conceived show theme is an effective motivator for me. It triggers a flurry of research and allows continual learning from a variety of sources; even unexpected sources such as mathematics. Throughout, it is important to have fun.