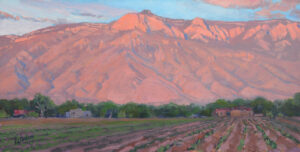 Dick is a plein air artist whose paintings communicate the moods and seasons of nature. He has been given the gift of translating what he see and feels into paint on canvas and feels a responsibility and obligation to share that gift. Dick's work is characterized by a sense of authenticity—he prefers to paint on location to better capture the feel of his subject. High winds, blowing dirt, bitter cold or even insects in the paint do not deter Him, but help to capture the feel of the subject. And in the process of capturing a painting there is a state of spiritual flow he enters into that makes everything come together and worthwhile.

“I remember painting close to the edge of Canyon De Chelly with an artist buddy of mine. There was a ferocious wind. One strong gust took my hat, blowing it over the edge and into the canyon – a sheer 400 foot drop. “You’ll never see that hat again,” my buddy said. A few seconds later, the hat came blowing right up out of the canyon and landed a few feet from me. I quickly picked it up.”

Dick has been painting outdoors for 40 years, and has taught art to everyone from children in Albuquerque Public Schools to adults at Eastern New Mexico University. Dick has been a professional artist since earning his degree in art from Eastern New Mexico University. He has studied with Wilson Hurley, Clyde Aspevig and Michael Lynch. Dick has taught workshops around the US. As well as winning awards in various completions, most recently he won the Jeff Potter award for best landscape by a New Mexico artist at the PAPNM National Members Show. Dick Wimberly serves as the 2019 President of the Plein Air Painters of New Mexico and is a member of the Oil Painters of America and of the Laguna Plein Air Painters Association. He is represented by Purple Sage Gallery in old town ABQ.