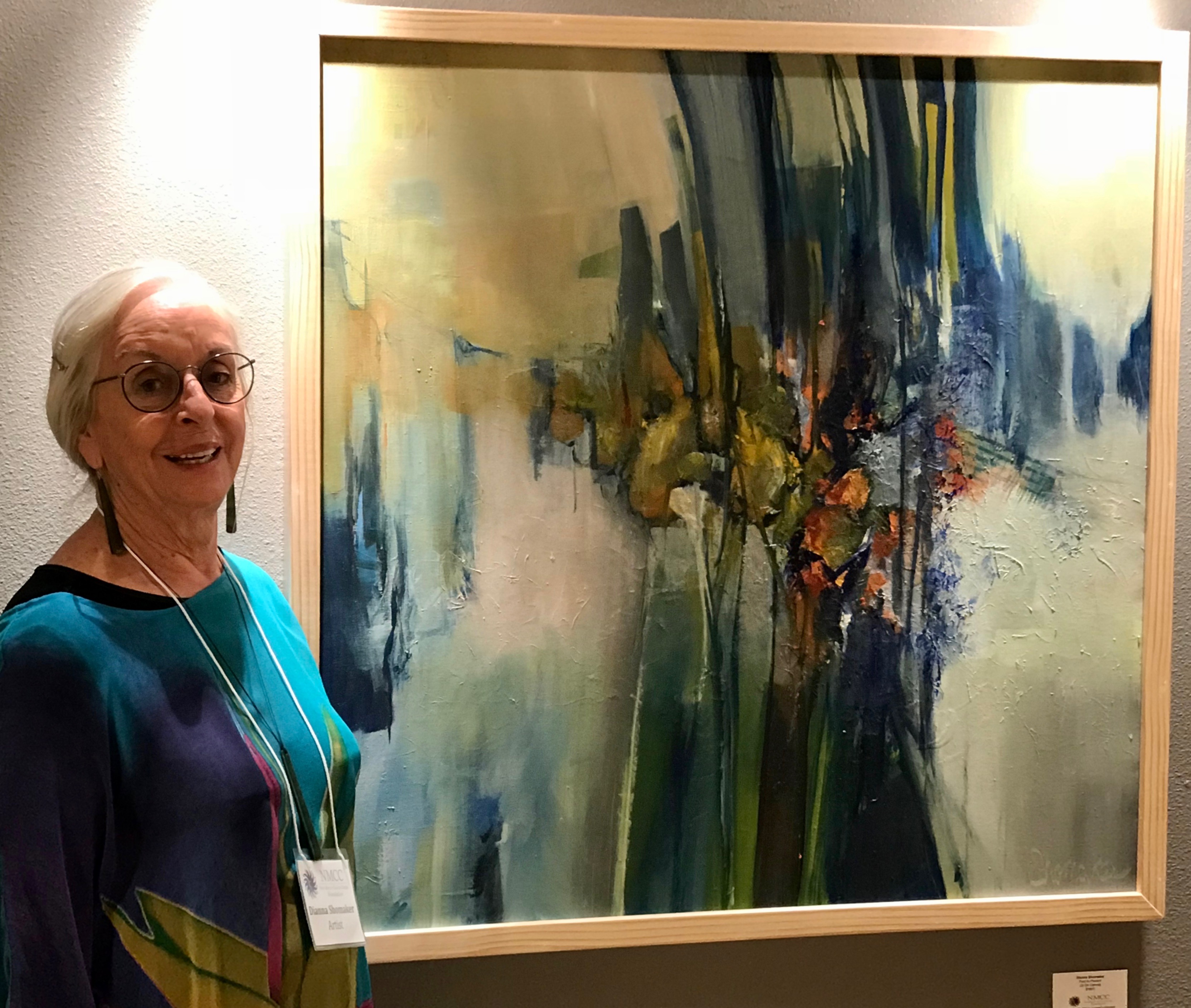 Dianna Shomaker grew up on a small farm in western Washington State during the 1930s. A child of the depression, she created her own hours of play with whatever she could find; inspiring in her a tremendous creativity that fuels her art to this day.

Dianna and her young family were lucky enough to live abroad in the early 1970s, enabling her to study abstract painting with Dr. Sachweh in Zweibrucken, Germany. Upon her return to the United States she became a nursing professor at the University of New Mexico in Albuquerque, which allowed her to take multiple art workshops at UNM and with wonderful teachers like Sam Smith, Virginia Cobb, Ted Hogsett, Charles Dunbar, Katherine Chang Liu, and Ellen Koment. She also pursued other academic interests, earning an MA and PhD in Cultural Anthropology from UNM in the early 1980s.

From there Dianna became an Associate dean in UNM’s College of Nursing and continued to pursue my art career on a part-time basis. Upon retirement from higher education in 2000, she was finally able to devote herself to a full-time art career.

Most recently she’s been able to study encaustic art here and abroad with Ellen Koment, Belen Millan and Francisco Benitez.

I've been a nurse, a university professor, a researcher, a dean, and an anthropologist; but through it all, I've been an artist.

Paintings can be such powerful tools for expressing the things we value. This is why I paint – it gives me another voice in my world. What I paint – as well as how I select my design and palette – is as close as I can get to expressing those feelings whose meanings cannot be conveyed through words alone. I want my paintings to take the viewer into that nebulous world and convey a deeper meaning. I want the viewer to stop and be drawn into a thoughtful study of the work. Painting provides me with greater freedom to focus on such messages in a more creative way.

Many times while I am creating these works, accidents and detours pop up - “happy accidents” I call them. They bring out another subconscious value expressed in a new way. Painting, for me, is a way to explore and enhance the subject. Abstraction lends itself to my process; however, it is not the only way to convey a message. Line drawing and figures embedded in the work are also important tools for development, movement, depth and expression.

My goal is to inspire myself to think more deeply and to be more creative in the unfolding of a drama on canvas. If a work is successful it should provoke and tease both the viewer and me. I want it to be an enjoyable journey for everyone.

Being a child of the depression I created my own hours of play with whatever I could find on our little farm. As I grew up that approach has stayed with me. When sewing, I alter the pattern, in the kitchen no recipe goes forward as written, and in art I have continued to follow the beat of my own drummer. I believe that set the stage for the manner in which my art career developed.

First there were formal art classes in college. Then came painting in oils, collage, acrylics, drawing and augmenting. The brush is sometimes a palette knife, a stick, a spray bottle and more. Today, I still love to experiment and try new techniques.

My latest development came when a woman entered our gallery and offered to the first taker her supply of encaustics. I took them, enrolled in classes for encaustic painting, and suddenly I had one more way to create in my toolbox. A panoply of possibilities opened up.