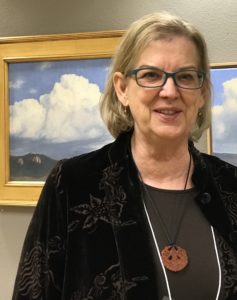 Diana Stauffer rekindled her passion for art in 2005 following a career in journalism and corporate communications. She initially gravitated to soft pastel because of the medium’s luminosity and extensive pre-made color palette before turning to oil because of its greater mobility for plein air painting.

The romanticized and monumental works of 19th century artist Albert Bierstadt made Diana dream of leaving Connecticut for the American West. Thomas Moran’s iconic views of the great national parks – Yellowstone and the Grand Canyon – compelled her in 1972 to finally leave New England for the big skies of New Mexico. Except for a brief professional assignment in Arizona, Diana has made her home in the Land of Enchantment.

Among the contemporary landscape painters admired by and influencing Diana are Clyde Aspevig, Bill Gallen and Dave Santillanes.

She has exhibited in group shows and juried events throughout New Mexico: In Albuquerque at the New Mexico Art League, the South Broadway Cultural Center, Sumner & Dene gallery, the Albuquerque Arts Alliance, the Harwood Arts Center, the Fine Arts Gallery, African American Performing Arts Center and the Hispanic Arts Center at EXPO New Mexico, and the City of Albuquerque Open Space Visitors Center; in Taos at the Millicent Rogers Museum and Wilder-Nightingale Fine Art; in Madrid at Johnsons of Madrid gallery; in Socorro at Curious Crow gallery; the Ruidoso Regional Arts Council I Ruidoso, and private venues.

Diana is a member of Plein Air Painters of New Mexico and the New Mexico Art League.