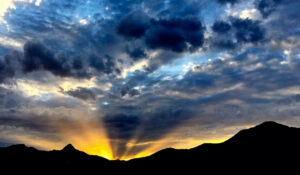 Dave had a 26-year, defense-related career as a Marine helicopter pilot, intelligence officer, and systems analyst/project manager with Science Applications International Corporation. He retired in 2007 to devote more time to art.  Although self-taught, he was encouraged by an Australian art critic and others to pursue a professional career, starting in 2009.  He was subsequently inducted as a Signature Member of the National Watercolor Society and has been in numerous exhibitions at international, national, state and local levels. He has had five solo exhibitions since 2010, one of which was selected by Veer Magazine as one of the “Top Ten Visual Arts” events of 2011. He was very active with the art community in the Hampton Roads area of Virginia until moving to New Mexico in July 2012. Dave was one of the founding members of the Peninsula Watercolor Society, as well as a Signature Member and former Vice-President of the Virginia Watercolor Society.  He has taught, given demonstrations, installed, and juried exhibitions in Australia, New York, Virginia and Texas. His paintings and photographs have been featured in the Las Cruces Museum of Art, and in various galleries around southern New Mexico. Las Cruces Magazine featured him as one of the “59 Area Artists You’ll Want To Meet” in 2014/2015. He has been a featured artist in the New Mexico Artist Directory.  He has been selected for the last two "Here and Now" exhibitions, the largest juried museum show in the southern region of the state. In 2019, Dave was invited to be one of the 20 select members of The Border Artists, a prestigious group representing southern New Mexico and west Texas. He exhibits regularly with this group.

Dave's artwork can be found in private, institutional, and corporate collections world-wide.  His photography is represented in the Rio Bravo Fine Arts gallery. He has various commissions in progress at any given time. In addition to the Outback, subjects include those from his childhood in the Caribbean, visits and residences in Europe, and other international travels. His primary media are watercolor and photography, but he has worked in oil and acrylic, sculpted, designed mobiles, illustrated children’s books, painted a large mural, and created a range of crafts. Dave prefers a realistic style to reflect the natural beauty in both small and large subjects.

Many of Dave's paintings and photographs reflect a key facet of his art, a love for the Australian wilderness that dates back to the 1970’s, when he spent a year exploring the entire continent in an old Volkswagen van. He has returned on various occasions, inspiring numerous paintings and photographic series. In 2013 he was Artist-in-Residence at the Bundaberg Regional Art Gallery in Queensland, in conjunction with the Wide Bay-High Desert international exchange exhibition between galleries in Las Cruces, NM and Queensland.  More recently he was the December 2018 Artist-in-Residence at the Q-PopUp Gallery, New South Wales. Both events featured his Australian and Southwestern art.

He has been an artist and photographer for over 50 years, capturing beauty and drama from destinations around the world. He focuses on watercolor painting, sometimes taking a year or more to complete a significant work based on photos I've taken. Photography has also been a bridge between paintings and a means to channel his creativity during busy and challenging times.