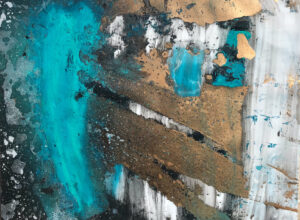 I am an abstract artist creating works (mainly) on plexiglass panels. The technique I use is known as Verre Glomis/Reverse Glass painting. To start, I place a plexiglass panel (the panels come with a protective opaque film on both sides) flat on a table in my studio. I remove the protective film from the side facing up. I use a variety of chemicals to etch the panel. Depending on whim, I mark, scratch, sand, hammer, or even apply heat to the panel. Then I mist/spray, spatter/pour water onto the panel and the water becomes a working medium as well. After the water and everything else is balanced – or unbalanced - to my liking I paint the panel with spray paint, plus a few other secrets and tricks developed over the years. After this, I prop the plexiglass up against a wall in the studio and remove the protective film from the other side of the panel. This is an exciting moment for me as the artist; I have some sense of how everything is going to look but not an exact idea. So, I try my best to remove the film without looking at the painting. Then I turn and walk to a chair in the studio and sit down - and view my painting for the first time! I sit and look; sit and think; sit and meditate; asking myself how does everything play off of everything else? I take notes; at times, I wash most of the paint off the plexiglass and start the painting all over again. At times, I add to and/or subtract large portions of the painting; other times, I hardly change a thing. Sometimes I apply paint to both the front and the back. Then the paint is sealed, mounted and hung.

I see my role in my own paintings as both that of active participant and passive observer. For instance, I prefer to react to what is unfolding in 'real time' and I have always recognized this impulse as very much related to the play of childhood, as well as to the kind of conceptual freedom seen in the mature work of Jackson Pollock, where certain initial decisions are made regarding color, scale and speed, but in which forces of gravity, inertia, and splatter, among others, assert themselves.

This interplay between results which are directed and those which are intuitive and accidental is what I am after in my paintings. It is an expression of the way we live our lives as we plan, initiate and then find ourselves surprised or even marginalized by results we could not have anticipated. In traditional Japanese aesthetics, this concept is known as 侘寂 (wabi-sabi). This is a world view that is focused on accepting transience/imperfection/impermanence and seeing it as beautiful. Aesthetic characteristics of wabi-sabi include asymmetry, roughness, cracked, simplicity, modesty, intimacy, and appreciation of the ingenuous integrity of natural objects and processes.

My paintings offer an opportunity to meditate, a chance to get lost in thought, a chance to imagine and a chance to remember that we are all artists! Ideas continuously evolve; my work is always In PROGRESS, THIS IS WHERE IT IS AT!!!!!

My works have no direct reference relative to scale; the compositions appear macroscopic or microscopic as the viewer is likely to recognize a condensed world of amoeba-like forms jockeying for position or, conversely, a meteoric streak across a cosmic void lit by literally thousands of points of light.