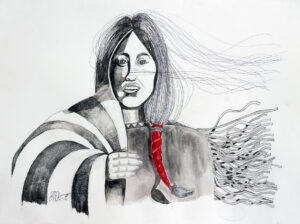 I have been the Art Director at several Advertising agencies where I designed and rendered a great many print and television pieces. Throughout my career, I have illustrated books, newspaper and print stories, done editorial cartoons and portraits. In addition, I have written and illustrated a children’s book, “Some Antics,” about animals, and I am currently working on a couple of other books. I have participated in art exhibitions throughout Albuquerque. One of my favorite exhibitions was a two-person show with Sam English, renowned Chippewa painter, at the art gallery Casa de Colores in Old Town.

I began drawing somewhere around the age of four or five where I was born and raised in West by-God Texas. Over the years I experimented with several media until one day, maybe thirty years ago, I discovered ink and brush. I had worked with pen and ink extensively, but mixing ink and water was a whole different animal. I had no reference at all, but I continued to work in this medium.

In the early nineties, I went to Los Angeles, but I returned to Albuquerque in 1994. I did not have enough money to purchase several colors of ink. I only had enough to buy one piece of expensive watercolor paper and one bottle of ink, so it was by circumstance that I ventured to a monochromatic style. I really liked working in black and white, it created a sense of drama and focused on shading on texture.

I love doing my artwork, I get lost in the process. I look up after working on a piece for a while and suddenly it is midnight. What happened to all those other hours. Jeez! Recently I started experimenting with adding selective splashes of color into my pen and wash paintings and it seemed to take my images to a new dimension. For me, this new technique works very well with my images portraying Native American people.

Years ago, when I only had black ink, a brush and one very expensive piece of paper, I made a mistake. In order to correct it I used sandpaper. It ended up creating the exact effect I was looking for. I discovered the Exact-o blade, the eraser, even a dentist’s utensil and other such tools in the same way – by accident and experimentation. So, in a since, I’m an accidental artist!