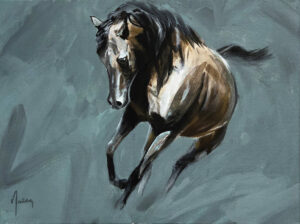 Bryce Nañez is an Albuquerque based artist from Las Cruces, NM.  He creates figurative and still life paintings, utilizing classical and contemporary techniques learned throughout his artistic career.

Nañez began painting professionally in 2014 and has shown his work in Austin, TX and Albuquerque, NM. His most notable work is a 36”x48” acrylic on canvas portrait titled ‘Pacman’, which was commissioned by the world champion Filipino boxer and senator, Manny Pacquiao (2016).

He plans to donate services and artwork annually in support of local organizations and make a difference in his community.

My artistic style has transformed over the years from a strong play on realism, to an altered sense of the term. I utilize realistic traits like perspective to create an illusion of space and depth, while allowing for a more painterly representation of the subject. I allow myself the flexibility to cross stylistic boundaries but often fight the urge to perfect lines. My works present a path of vulnerability and convergence of developmental progressions. My mission as an artist is to effect positive change in the world through art and charitable giving.