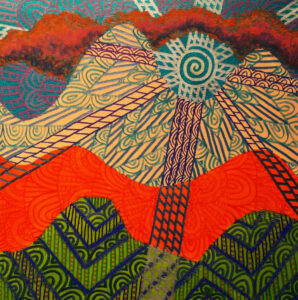 Albuquerque artist Jones finds inspiration from his surrounding environment in New Mexico to create his multimedia works of art. He explains the skies of New Mexico influence his work from sunrise to sunset. Jones creates his artistic endeavors by using painting, drawing, and assemblage techniques in his artwork.

Jones dedicates his art exhibit in loving memory of his parents the late Retired USAF Lt. Col. Herman Anthony “Toney” Jones and Mary Katherine Brown Jones, a former preschool teacher. Bobby lost both of his parents to cancer. His father passed away in 1998 from a stage four cancerous brain tumor at the age of 66; his mother, from the complications of breast cancer in 1992 at the age of 57.

Bobby lives and works in Albuquerque, New Mexico. He is a school teacher and emerging artist who has shown extensively in the Albuquerque area.