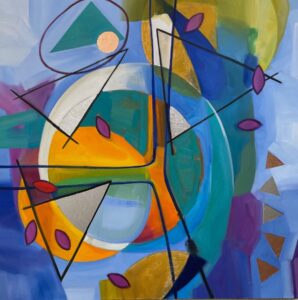 I grew up in Fort Worth, Texas, and started making and selling art early on. I attended the University of Texas before moving to Taos, New Mexico. During my first years in Taos I designed and made jewelry, studied tapestry weaving, created fiber sculpture, wrote poetry and continued to hone my drawing skills. I also began to teach art. By the late eighties I decide to return to painting. In 1990 I moved to Albuquerque to attend the University of New Mexico. By that time I had already been showing my work nationally and had exhibited with several of my professors. My main goal in getting a BFA was to fill in the gaps in my knowledge of Art History. I graduated with honors in 1993. I had planned to work on a Masters in Fine Arts however my youngest son who was three at the time was diagnosed with autism so I chose a path that would allow me to care for him and stay involved in the arts. I applied for the Masters of Art Education program and graduated, again with honors in 2003.

I taught for Albuquerque Public Schools for sixteen years as well as teaching in the Art Ed Department at UNM. I retired from the public schools in December of 2018 but I still continue to teach at UNM as well as the New Mexico Art League. I am a two-time Golden Apple Distinguished Teacher winner and in 2016 I was named an Albuquerque Art Treasure. I have painted the South West for over forty years. My work has been exhibited nationally and internationally and is in numerous public, private and corporate collections.

The icons in my abstract paintings, the triangle, the stick or straight line, the curved line, and the oval or egg, arrived out of the process of painting for most of my sixty years These items are often joined with symbols taken from the popular culture, the heart for example, and more ordinary objects such as the chair or the lily. Each image leads to the next and, I like to think, they are born out of the Jungian “collective unconscious”. This idea of a vast timeless pool of thoughts, memories and ideas from which all beings dip into and contribute to has been made apparent to me in numerous ways. The egg or oval shape, which is a metaphor for creation in scared geometry, has been a major element in my work for over twenty years. Most recently this form has transmuted into the seed, yet another perhaps more literal symbol for creation, as all of life is present in the seed.

Years ago, I was excavating a small canvas, painting then sanding, working, reworking and layering, until several compositions emerged. As I worked a new element appeared, the simple curved line that, symbolically for me, were bowls. For me, the idea of the bowl is that of a humble offering. The egg or seed inside the bowl is all creation seen as an offering to the universe. What more do we have to give than our total being? Some viewers of these works have called this curved line a “smile”. I like this perspective since it underlines the joy with which accompanies the gift of self.

My yoga instructor commented that the placement of the curved lines and egg/bowls reminded her of yantras. Yantras are Eastern geometric symbols used as meditation points to balance the mind and help focus it on spiritual concepts. Beautiful! The idea of the yantras as external symbols intended to bring about internal balance is closely aligned with the intent of these paintings.